Hope everyone has a safe and Happy New Year!
Posted by wortwood at 11:52 PM No comments:

A belated Merry Christmas to all. Hope everyone had a good day with their families.
Posted by wortwood at 2:34 PM No comments:

I always had an issue with the use of speed cams and stop light cams. For those of you who don't know these are cameras that take a picture of your license plate if you are in the intersection when the stop light is red or if you are exceeding the speed limit. The issue for me is the fact you are not allowed the constitutional right to face your accuser. The courts work around this by making it a misdemeanour and only has a fine, no points on your licence. It simply becomes a money maker for the counties that use them.
Well some Maryland teens found a way to use them to get back at others. From the article; " As a prank, students from local high schools have been taking advantage of the county's Speed Camera Program in order to exact revenge on people who they believe have wronged them in the past, including other students and even teachers.
Students from Richard Montgomery High School dubbed the prank the Speed Camera "Pimping" game, according to a parent of a student enrolled at one of the high schools.
Originating from Wootton High School, the parent said, students duplicate the license plates by printing plate numbers on glossy photo paper, using fonts from certain websites that "mimic" those on Maryland license plates. They tape the duplicate plate over the existing plate on the back of their car and purposefully speed through a speed camera, the parent said. The victim then receives a citation in the mail days later."
Who says teens don't use thier brains.
Posted by wortwood at 4:04 PM No comments:

A friend of mine has started a new site. Like me he spent time in the past maintaining a server somewhere and got tiered keeping the server up. Blogger is just so much easier. Give his site a Visit. http://www.kavalsky.com/

On a holiday note, today is the first day of Hanukkah. Happy Hanukkah to all. Enjoy the 8 crazy nights.
Posted by wortwood at 7:35 PM 1 comment:

I was cleaning up my pics and thought I would post this from a few years ago. I was out in Vegas for a conference and shot this with my photo camera. This is the fountains in front of the Bellagio. 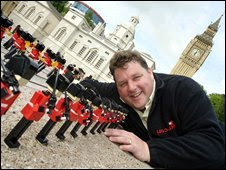 Now this is a job I would enjoy. Lego Builder, Brick Master is just a cool title.
http://news.bbc.co.uk/2/hi/uk_news/magazine/7661211.stm
Posted by wortwood at 8:44 PM No comments: