I have been interested in privacy, focusing on electronic information privacy for several years. Wanting to read more on privacy, in a more legal perspective, I searched on Amazon and found this book; "Guarding Life's Dark Secrets: Legal and Social Controls over Reputation, Propriety, and Privacy". It is an interesting look at the history of reputation and privacy, from the Victorian era through today. A good, interesting read.

Posted by wortwood at 1:22 AM No comments:

So are you supposed to marry the robot or.....

So everyone knew this day would come, when robots started to move into the bed room. This week a new robot was announced, meet Roxxxy.

From the article; "A former Bell Labs scientist, Douglas Hines, has unveiled what he describes as the world's first sex robot: "She's a companion. She listens to you. She speaks. She feels your touch. She goes to sleep." Christened "Roxxxy," the robot has life-like silicone skin, a mechanical heart, and five personality options ranging from "Wild Wendy" to "Mature Martha." Read more if you want to, beware some content may not be work or kid friendly. 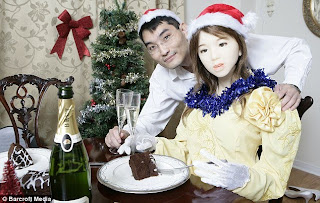 From the article; "Inventor Le Trung spent Christmas Day with the most important woman in his life - his robot Aiko.The science genius enjoyed a festive dinner with his mum, dad and his £30,000 fembot which he designed and built by hand.Le, 34, from Brampton, Ontario, Canada, even bought gifts for his dream girl, who is so lifelike she speaks fluent English and Japanese, helped cook the turkey and hang up decorations.'Aiko is like any woman, she enjoys getting new clothes,' he said.'I loved buying them for her too.'
What can you say about young robot love? I wonder if in the future we will talk or interact with people at all.

Posted by wortwood at 1:19 AM No comments:

Back to School and I Hate Paper Books

I finished registration today for Cyberlaw courses and it was an interesting experience on lots of levels. First, I felt quite out of place with all the young kids running around. By “young” I mean late teens, early 20’s. Second, I don’t enjoy academia, I have never enjoyed school. Third, I hate paper books.
Since getting my Kindle in 2009, I have read three non-technical books. That is three more than I have read in the last 5 years. The features to enlarge text, convert text to speech, and automatically provide word definitions and notes in book make it very useful. These features make it invaluable to me to provide the most efficient way for me to input information into my brain.
So back to the point, I went to the college bookstore to get my required books, hoping to find at least a couple later on Amazon.com for Kindle, maybe in PDF format on supplemental CD like a lot of technical books nowadays. Long story short, no such luck. The only options were electronic format was e-book for a couple titles, and that format is not compatible with Kindle.
So why don’t textbooks support more electronic formats? Money in resale. The textbook companies make money over and over again on the resale of book at only a slightly discounted price. Like the newspapers before them, they have no idea how to make money in this new media, so they are squeezing every cent they can get now, before they end up like the newspapers: bankrupt. In the meantime, we will have to keep paying top money for used books.
Posted by wortwood at 1:31 AM No comments:

"A hundred years ago, lighting was the killer app for electricity, the thing that made it worthwhile to have installed. No one particularly understood what else electricity might bring to the mass market, because other uses were generally specialized, the province of experts, the wealthy, or industry. Compressors to allow refrigeration and freezing, electric heat, and other innovations came later to homes."
This is an interesting articel that compares electricity 100 years ago to broadband access today. Here is a section that if you replace the word electricity with broadband it could be used today.
"In researching a KUOW segment airing soon about the digital divide and Seattle’s particular problems with broadband, I found this marvelous statement from Oct. 24, 1905, in the Richmond, Virginia, Times-Dispatch newspaper. A lawyer named Henry Anderson was arguing on behalf of two clients of the city who didn’t want to be taxed to pay for a municipal utility. Among other arguments against municipal ownership, he said, eloquently:
“Unless we adopt the principles of socialism, It can hardly be contended that It is the province of government, either state or municipal, to undertake the manufacture or supply of the ordinary subjects of trade and commerce, or to impose burdens upon the whole community for the supposed benefit of a few….
“The ownership and operation of municipal light plants stands upon a different basis from that of the ownership of water works, with which it is so often compared. Water is a necessity to the health and life of every individual member of a community…It must be supplied in order to preserve the public health, whether it can be done profitably or not, and must be furnished, not to a few individuals, but to every individual.
“Electric lights are different. Electricity is not in any sense a necessity, and under no conditions is it universally used by the people of a community. It is but a luxury enjoyed by a small proportion of the members of any municipality, and yet if the plant be owned and operated by the city, the burden of such ownership and operation must be borne by all the people through taxation.
“Now, electric light is not a necessity for every member of the community. It Is not the business of any one to see that I use electricity, or gas, or oil in my house, or even that I use any form of artificial light at all.”
When will we listen to the past?
Posted by wortwood at 1:06 AM No comments: