Another video from our daughter. First of a series.

Posted by wortwood at 9:09 PM No comments:

A funny thing happened under the sea

This is a video that our youngest daughter filmed with her new ipod nano she got this month for her 10th birthday.

"This is the most dangerous thing that happened to a Lego city diver. (Ignore the cat.)" she says.

Posted by wortwood at 8:48 PM No comments:

The Enigma of a Code Breaker 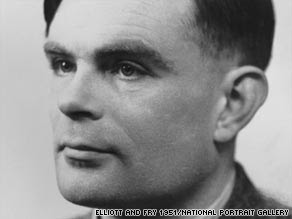 Ever since watching documentaries as a kid about World War 2, I have always been fascinated about that war. It was a time of great strength, fear, waste, and invention. War is never a good thing, but as a kid I watched in fascination and awe of what people did for God, Family and Country.
As the childhood fascination of war disappeared, the inventions are what kept my interest. This was a time of great technical advances. As my career moved to computers again, I found a new fascination with WWII.
The Enigma machines captured my interest, both their use and effect in the war as well as the efforts made to break the codes by the Allies. It was an interesting machine, but my true fascination with the subject grew when I learned about Bletchley Park and Alan Turing.
From the CNN article - "Turing was best known for inventing the Bombe, a code-breaking machine that deciphered messages encoded by German Enigma machines during World War II.
The messages provided the Allies with crucial information from the British government's code-breaking headquarters in Bletchley Park where Turing worked full-time during the war.
He was considered a mathematical genius and went on to develop the Turing machine, a theory that automatic computation cannot solve all mathematical problems, which is considered the basis of modern computing."
When I first of Turing I wondered why I had not heard of him before. Then I learned he had committed suicide in 1954 at the age of 41. I thought that was the reason I had not heard of him, he had cut himself short. Then I saw a new documentary (and I wish I could remember the name of it) that made it all very clear.
At the end of the war, the code breakers of Bletchley Park destroyed everything: the documents about broken codes, one of the first computers that had been made to break the Enigma codes faster. The group disbanded to their civilian lives. Alan Turing, the mathematical genius that served his country so well, and built one of the first computers, was then prosecuted by his own government.
"Turing was subjected to chemical castration in 1952 after being found guilty of the charge of gross indecency for having a homosexual relationship, an illegal act at the time. He committed suicide two years later."

So what is the point to this rant? Well, first I hope Alan Turing gets the recognition and apology that he deserves. Second, I hope we can learn from history, and not persecute others for different lifestyles and beliefs. Third, well that is my own selfish reason and that is simply to vent.
Posted by wortwood at 7:08 PM No comments: