I thought that everyone would like to see what I was greeted with on the whiteboard one evening. For those who don't know' we homeschool our three children, and we have a separate room used for study, complete with whiteboards. What a fine display of cursive writing and artistic skills that our three children have learned. I will let Lemony fill in the details. 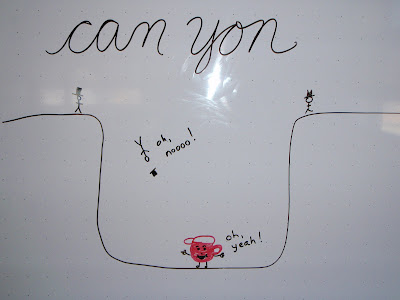 Details: The kids have been saying "canyon" when they mean to say "cannon", so we had a little lesson complete with pictures illustrating the difference between the two concepts.

I went to one of those paint-your-own-pottery places with a friend last fall when I was in a bit of a goofy mood, and came home with a pitcher on which I had painted the Kool-Aid Man. It's not like we even drink Kool-Aid, so the kids were really confused by my new friend. So I had to get on YouTube and dig up some old TV commercials so I could show the kids who the heck this Kool-Aid man was.

Back to the "drawing board": we had drawn the canyon and then I realized that we needed something to give an idea of the size of the thing we were talking about. Enter stick figures. And then something to illustrate the matter to be concerned about when looking at a canyon a bit too closely. Enter "Oh, nooooo!" stick figure. You can see where it went from there. --L.
Posted by wortwood at 11:02 PM

Email ThisBlogThis!Share to TwitterShare to FacebookShare to Pinterest
Labels: Homeschool