BigDog v. Roxxxy: robots that you fight and ....

BigDog is a cool robot that looks like a giant headless dog. It was design to carry supplies over almost any terrain. The video below is from 2008, and is impressive. I especially like it crossing ice, and jumping.

So now the next step; "DARPA just awarded a $32 million contract to build it.
The contract's been won by maker Boston Dynamics, which has just 30 months to turn the research prototype machines into a genuine load-toting, four-legged, semi-intelligent war robot--"first walk-out" of the newly-designated LS3 is scheduled in 2012."

"LS3 stands for Legged Squad Support System, and that pretty much sums up what the device is all about: It's a semi-autonomous assistant designed to follow soldiers and Marines across the battlefield, carrying up to 400 pounds of gear and enough fuel to keep it going for 24 hours over a march of 20 miles." 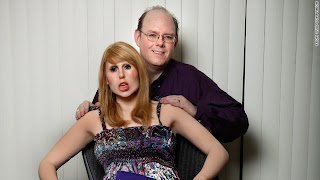 Meanwhile the inventor of Roxxxy the adult robot has named his price. "Meet Roxxxy, who may be the world's most sophisticated talking female sex robot. For $7,000, she's all yours.
"She doesn't vacuum or cook, but she does almost everything else," said her inventor, Douglas Hines, who unveiled Roxxxy last month at the Adult Entertainment Expo in Las Vegas, Nevada."

Again I wonder which robot will cause the most problems over the world in the next 20 years.