Fight for Iranian Democracy by Proxy

This is from a company blog called Renesys. They are "the leading provider of objective, critical intelligence on the worldwide state of the Internet." The only reason I cut and paste that statement from their site is because I have always been impressed with there posts. This post is about how the Iranian people continue to get access to the Internet. It is a little technical but hang in there.
"If you put 65 million people in a locked room, they're going to find all the exits pretty quickly, and maybe make a few of their own. In the case of Iran's crippled-but-still-connected Internet, that means finding a continuous supply of proxy servers that allow continued access to unfiltered international web content like Twitter, Gmail, and the BBC.
A proxy server is a simple bit of software that you run on your computer. It effectively lets you share your computer with anonymous strangers as a "repeater" for content that they aren't allowed to fetch themselves. For example, an Iranian web browser might be manually configured to use your computer (identified by an IP address and a port number) as a Web proxy. When your anonymous friend reads twitter.com, or posts a tweet, the request goes via your computer, instead of to Twitter's web server directly. Except for a little delay, and the fact that your friend gets to see what the uncensored Internet looks like from New York or London or São Paolo instead of Tabriz or Qom, surfing through a proxy is pretty much like surfing without one.
As you might imagine, open web proxies are valuable commodities in places where it's forbidden, possibly dangerous, to surf the Internet. Iran's opposition movement has been vigorously trading lists of open proxies over the past week. And as you might further imagine, the Iranian government censors have worked overtime to identify these proxies and add them to the daily blacklists.As an experiment, we geolocated a list of about 2,000 web proxies (unique IP addresses and port numbers) that were shared on Twitter and other web sites over the course of the last week, to see if we could discern patterns in the places that are hosting them. Most of these are no longer reachable from inside Iran, of course, precisely because they were made public. The following map shows the distribution of those proxies worldwide." 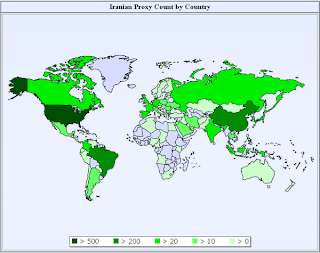 "...Here's a geographic visualization of the proxies, drawn in Google Earth. In the first one, we've drawn Iran in green..." 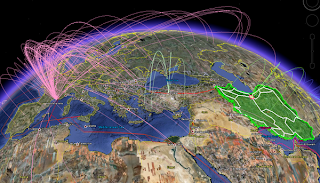 I love this stuff. The level of technical knowledge along with the understanding of the world politics is great. Read the rest of the article.