One of the many reasons I started a blog rather than hosting my own webserver as I have done in the past is because I wanted to post videos. The problem with that is they take a lot of room and more speed than I was willing to pay for. The videos that I had in mind were not family videos but dash cam videos.
When I was consulting and driving to DC, VA and the far reaches of MD every day it is amazing what I saw on the road. I wanted to record this stuff. I needed a relatively cheap way of recording to a digital chip, by battery or 12V, a small screen to position my camera and be able to use a small pin hole camera that would not be in my way. I looked at my options. I found a small PDVR (Personal Digital Video Recorder) that fit the budget, gave me the best resolution for the price and would meet my requirements. The SVAT CV1002DVR Handheld DVR With 2.5" LCD Screen and Color Pinhole Camera fit the needs, and I got it when it was on sale off Amazon.com. (See link to Amazon below for specs on the DVR.)
So then I set it up in my car. The reason I wanted a pin hole camera is because I had seen more expensive mount kits that you can buy and they slide over the rear view mirror. It was a good place for the camera, out of the way and hard to see, as seen below from the outside view; 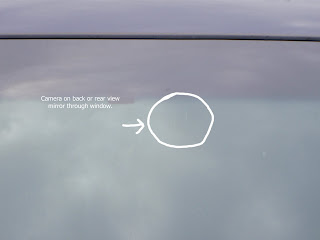 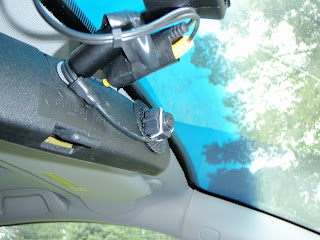 I was able to wedge the cables along the top and side of the windshield so they are out of the way and down the door jamb to under the passenger side console. The best place to get power was inside my main console where I have a 12V power plug. I had an old power converter to go from the 12V to a standard 110V to power the camera. Below is what my center console looks like now. 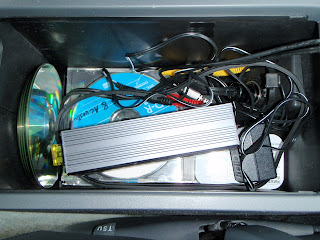 Now we align the camera by attaching the PDVR. Once I tell it to start to record the LCD turns off after a few minutes to save battery. The battery lasts about 2 1/2 hours so I also purchased a 4GB CF (compact flash) card to record the same amount of time. The PDVR then sits nicely in a cup holder once it is on and running. It requires no attention as I drive. 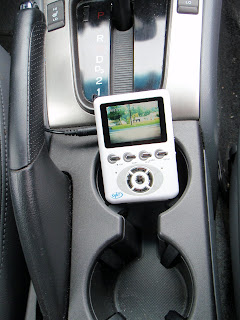 Of course as Murphy's Law goes I have not been able to capture that many dramatic things. You can search the Blog for car and vid for the few past posts. When I don't have it, or forget to charge the battery things happen, like ice storms and car wreaks, but most days when I have it running it only records the usual nightmare of Baltimore-Washington DC traffic. Here is a Sample at 4X speed.

I guess it is a good thing I haven't got a lot of 'interesting' car videos to post, but my daily commute does not make riveting video.
See you on the road.
Posted by wortwood at 3:41 PM

Email ThisBlogThis!Share to TwitterShare to FacebookShare to Pinterest
Labels: camera, Car, how to, Video