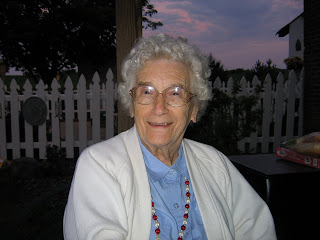 When I grow old I hope to be
As beautiful as Grandma
Lee.
Her hair is soft and fluffy white.
Her eyes are blue and candle
bright.
And down her cheeks are cunning piles
Of little ripples when
she
smiles.

My sweet and feisty grandma celebrated her 89th or 90th birthday (she's not sure) a few months ago. She has had some health problems this past week that have really been a struggle for her. She is such a special lady, and I have missed her greatly since I moved from my hometown, where she lives.
Over the years, here are some things I've fondly remembered from growing up with Grandma so close by:
She taught me how to play cards, and the secrets to a number of impressive card tricks. We used to call her the Card Shark Lady.
She made bread & butter pickles every summer, and now I can't even eat pickles, because none can compare to the ones she made.
She often babysat my sister and me, and once when I was bored and fidgety, she cut up some rags and sewed a doll for me, on the spot. Now my daughter sleeps with that very same doll, who has consistently survived the washing machine like nothing you can buy in a store.

On Christmas Eve when I was a kid, Grandma often slept at our house, and since I had a bed big enough for two, we'd lie there together half the night, telling stories and jokes and having a fine time. My mom would yell up to the bedroom, "You kids go to sleep, now!" and Grandma would giggle like a mischievous little girl. In the morning, we'd sit around the Christmas tree and eat the cinnamon rolls she'd brought over the night before. A few years ago, I revived the homemade cinnamon roll tradition for our own holiday celebration.

She let us believe that she had two birthdays: one in September and the other in November, because really, she's not exactly sure when she was born anyway.

When she was in her 70's, she dressed up as Elvira, Mistress of the Dark for a Halloween party, and used empty jumbo sized margarine tubs to achieve a more busty appearance.
She taught her pet bird to say objectionable things.
A keen quilter, in her later years she scaled down the size of her sewing projects, and soon earned a reputation as the Pot Holder Queen. My kitchen drawer pays homage to that legacy. She once asked me how the pot holders were working for me, and I told her I'd been using them as trivets but was nervous that they might get ruined. She said, "Oh, just flip them over and use the back side! Then you don't have to worry." So now I use them every day, because I don't dare to argue with Grandma.
She taught me the value of things made with two caring hands. I thought of Grandma when I watched a documentary about quilts about ten years ago, and the words from the diary of a pioneer woman have stayed with me:

She loves the color blue and the scent of lilacs, and I think when spring comes, I will finally plant that lilac tree I've been meaning to get.

It's sad to watch my grandma's generation fade. They've seen and lived through so many things, and I think my generation could use more than a bit of their wisdom in the years to come.

Update: Grandma passed on January 20th, during her sleep. Dad brought home cinnamon rolls from the supermarket on the morning of the funeral. She looked very peaceful.

She would love this.

When you moved out, she would sleep in my room with me and do the same thing. She was ALWAYS the one that started the trouble too!!

What wonderful memories she left with you and that you are sharing them with us. Keeping you all in my thoughts and prayers.